Wolf: ‘Don’t do any sports’

Gov. Tom Wolf announced on Thursday a recommendation to discontinue pre-K-12 school and recreational youth sports until at least the end of the year.

Wolf held a news conference Thursday morning and ended it abruptly after taking a question about whether he would allow spectators at high school sporting events this fall.

“We should avoid any congregate settings and that means anything that brings people together is going to help that virus get us. We should do everything we can to defeat the virus,” said Wolf when asked about no spectators at Pennsylvania Interscholastic Athletic Association events. “The guidance from us, the recommendation is that we don't do any sports until Jan 1.”

Wolf walked away from the podium after finishing his answer to end the news conference. His office put out the recommendation in the middle of the afternoon.

The PIAA held an emergency meeting on Thursday afternoon in response to Wolf's recommendation and guidance. The PIAA held a phone call with Wolf to try to change his mind, according

to a report by the Pittsburgh Tribune Review.

“We are tremendously disappointed in this decision,” the PIAA said in a statement after its meeting. “Our member schools have worked diligently to develop health and safety plans to allow students the safe return to interscholastic athletics.”

The PIAA statement also said it will meet again on Friday afternoon to discuss the situation and will have another statement after the meeting.

The statement from Wolf's office states that it is a “strong recommendation and not an order or mandate.” It goes on to say, “As with deciding whether students should return to in-person classes, remote learning or a blend of the two this fall, school administrators and locally elected school boards should make decisions on sports.”

As far as youth sports go, the recommendation applies to individual and team school and non-school recreational youth sports, competitions, intramural play and scrimmages. The recommendation does not apply to collegiate and professional sports. Gatherings are still limited to 25 people indoors and 250 outdoors.

The PIAA and District 10 voted recently to move ahead with fall sports on the high school level. Surrounding states have either gone to a delay in the start of the season or have moved contact sports to the spring.

The question about fans was posed after a large pushback from parents and fans over word that spectators would not be allowed at fall high school sporting events. On June 10, Wolf's office put out guidance that read, “During the Yellow and Green phases of reopening, sports-related activities at the PK-12 level are limited to student athletes, coaches, officials, and staff only.” 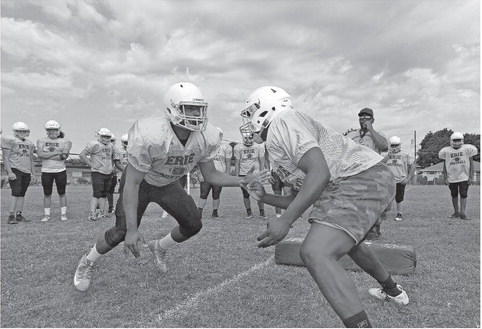