Since 2018, at least three white supremacist mass shooters in America have referred to the “Great Replacement” theory, a conspiracy claim that white people are being replaced in the U.S. and elsewhere by immigrants of color.

That’s the narrative Robert Bowers alluded to on social media before 11 people were killed at a synagogue in Pittsburgh in 2018. Patrick Crusius, accused of killing 22 people at a Walmart in El Paso, Texas, less than a year later, was inspired by the racist trope. So was John Earnest, who is accused of killing one person and injuring three others in a shooting in Poway, California.

Had federal law enforcement agencies known this conspiracy theory was spreading fast on social media, they might have been better able to prepare for these attacks, and perhaps even stave them off.

At least, that’s the argument made by senior Department of Homeland Security officials who outlined a new effort to analyze public social media posts in an effort to better understand extremist narratives and movements.

The new effort, which draws from research conducted by nonprofits, academia and the department itself, aims to identify narratives and campaigns that could lead to domestic terrorist attacks or violent incidents like the Jan. 6 insurrection at the U.S. Capitol.

Officials stressed that the goal is not to monitor specific individuals or chill free speech, but rather to build an early warning system for dangerous events.

“This is so we can have a greater unmestic derstanding of the threat environment as it evolves and then think through what steps we can take, working with state and local authorities and community groups to mitigate the risk posed by those threats,” a senior Homeland Security official said in an interview. The officials spoke on condition of anonymity in order to freely discuss the program.

But extremism experts, academics and former Homeland Security officials question how much is actually new about the effort and raised concerns about the specter of a massive federal security agency gathering information about U.S. citizens.

They pointed out that domestic terrorists don’t plan their attacks on publicfacing social media and questioned whether monitoring movements online can be effective without identifying individuals. And they worry the Department of Homeland Security might engage public sector “experts” to monitor do- extremism who don’t actually have the expertise needed for such complicated work.

“This effort could provide a clue about something thematically – sort of a mood or a sentiment that is out there, but for the most part, it’s not going to point you in the direction of specific plots,” said Javed Ali, senior director for counterterrorism at the National Security Council in 2017 and 2018.

“I saw the results of this cottage industry explosion post-9/11 when everyone was an international terrorism expert,” he said, “and if we’re not careful, we’re going to do the same dumb thing on domestic terrorism.”

The government’s approach to analyzing social media posts will focus less on trying to find a person who might commit domestic terrorism and more on the narratives and themes that are setting online communities alight, the DHS officials said. 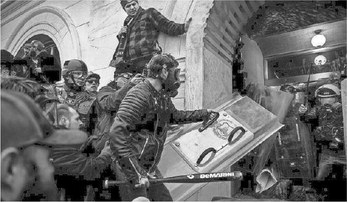 The social media monitoring idea is part of a reorientation by the Department of Homeland Security in the wake of the Jan. 6 riot. BRENT STIRTON/GETTY IMAGES