CWS debacle could be new normal

Columnist USA TODAY There is nothing satisfying about a baseball team’s season ending via a vague press release just after 2 a.m. on the day they were supposed to be playing Vanderbilt for a spot in the College World Series championship.

But in our still fraught world of COVID-19 and its intersection with sports, it cannot be too surprising that NC State found itself in such a horrible position Saturday, having been tested and contact traced to the point where the NCAA was forced to remove them from the tournament.

This situation is particularly ominous right now, at a time when a large number of college and professional athletes are still refusing to be vaccinated, risking not just their own and other people’s health but putting teammates in position to suffer the kind of consequences that cost the Wolfpack a chance to win a national championship.

Regardless of how you feel about the vaccine, the protocols that local governments have put in place, the NCAA, any professional league, the CDC, Dr. Fauci or whatever politician of your choosing, this is how it’s going to go for the foreseeable future. Don’t want to get vaccinated? Your choice. But understand what you’re risking: A positive test that, at any time, could ensnare others and wreck historic seasons.

Maybe NC State’s unvaccinated players who triggered this situation – two of them tested positive, according to a report from d1baseball.com – were well aware of that risk the entire time. But it sure didn’t seem like vaccination was a big priority or talking point for coach Elliott Avent, who said in a news conference Friday that encouraging players to get the vaccine wasn’t in his job description.

He also told a reporter who asked whether he was vaccinated that he didn’t want to talk politics, which shows you how off the rails this entire thing has gotten when a life-saving vaccine is now assumed to be part of the political polarization discourse.

'My job is to teach them baseball and make sure they get an education and keep them on the right track but I don’t try to indoctrinate my kids with my values or my opinions,' Avent said. 'We talk about a lot of things but these are young men that can make their own decisions.'

Indoctrination? C’mon, coach. Not only is that disingenuous on its face – Which college coach has ever said it’s not part of their job to teach life lessons and impart good values? – it’s just plain dumb.

And it’s going to get dumber as the year goes on because, at least anecdotally, there are still a lot of football teams both at the college and NFL levels struggling to get most of their players vaccinated. In fact, according to some college administrators I’ve spoken with, there are a significant number of teams haven’t even hit 50% – which means they’re entering the season with a competitive disadvantage.

The biggest takeaway from the College World Series should be that NC State isn’t a fluke event. It’s the canary in the coal mine for what we’re likely to see this fall as football teams with low vaccination rates see positive tests pop up, sidelining unvaccinated and perhaps some vaccinated players who did the responsible thing and still got unlucky.

And yes, there are plenty of examples so far of vaccinated athletes testing positive because the science tells us that vaccinated people could indeed have a small amount of the virus in their system and not get sick from it.

That’s the deal we’re going to have to make to get back to normal. It’s a pretty reasonable one, particularly within the context of a team that is sharing locker rooms, traveling together, eating together and practicing in close proximity.

Nobody wants a repeat of the 2020 season when a lot of teams, particularly in college, had so many positive cases that they fell below the threshold to conduct practices or safely play in games. The schedule was pure chaos, and some teams could never get on track because of the lack of bodies.

Amazingly, we have a way out of that: A vaccine that is safe and widely available. And yet, a certain percentage of athletes – many of whom take all kinds of supplements and powders to enhance their performance, no questions asked – are going to make the conscious choice not to take it.

The awful situation with NC State this weekend didn’t have to happen. But it seems almost certain it’s going to happen again and again. 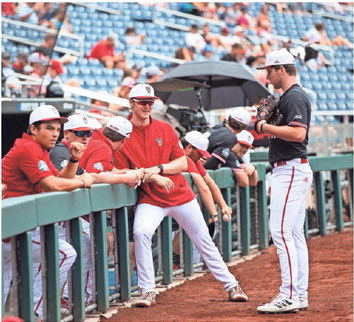 North Carolina State players, including Sam Highfill, right, wait in and around the dugout during a delay due to COVID-19 safety protocols before playing against Vanderbilt on Friday. Rebecca S. Gratz/AP