Why forgiving student debt is a bad idea

One good rule of thumb is to judge parties and politicians by their priorities. Politicians often pretend to be for every good thing under the sun, so the best way to judge them is to look at which things they actually work to achieve or spend political capital on. This will tell you not only what they’re really for, but which constituents they really care about.

By that metric, it will be very revealing if one of Joe Biden’s first actions as president will be to forgive student debt.

That’s an idea swirling around Democratic circles — particularly among the progressive base, which is worried that Biden might actually mean all that centrist and moderate stuff he said during the campaign. The base turned out for Biden, and now they want their pay-off — literally so, in the case of massive debt forgiveness.

Last week, a coalition of 236 progressive groups led by teachers unions called on Biden to cancel student debt on his first days at the office. Biden himself has already urged Congress to cancel $10,000 as part of a pandemic relief package.

I think it’s a bad policy, and bad politics.

Let’s start with the policy: As economists on the left and right will tell you, the economic cratering caused by the pandemic is not like a typical recession. In normal times, bailing out failing businesses is a bad idea because, among other things, it creates what economists call “moral hazard” — incentivizing bad decisions people make when they think someone else (i.e. taxpayers) will pick up the tab.

A restaurant that was profitable before COVID-19 hit did nothing wrong. Trying to keep such businesses, and their employees afloat during the pandemic, which Washington did on a bipartisan basis, was a good idea.

Proponents of loan forgiveness are claiming this is just like that. Well, before the pandemic no one was calling for a mass bailout of small businesses, but lots of progressives were calling for student debt cancellation. In other words, they think the pandemic is a crisis that shouldn’t go to waste.

That doesn’t automatically mean they’re wrong, but it doesn’t make them right either. Student loan forgiveness, even according to formulae that exclude the very well-off, has very few broader economic benefits. As Jason Furman (Barack Obama’s chair for the Council of Economic Advisors) notes, debt forgiveness would be taxable — which would cut into any stimulative effect on the economy.

Think about it this way: If you only have $1.5 trillion to spend, what policy would help the most people actually struggling right now? I don’t think cancelling student loans would rank in the top 20.

According to the liberalleaning Brookings Institution, roughly 30% of undergrads have none.

Another 25% have up to $20,000 in loans. Despite what you may have heard about the student debt crisis, only 6% of borrowers owe more than $100,000. Virtually all of them borrowed so much because they attended graduate school.

You can argue that people who choose to get graduate degrees — including many young doctors, lawyers and engineers in training — deserve relief. But do they deserve help more than truck drivers, mechanics or short-order cooks?

Heck, do they deserve relief more than the doctors, lawyers and engineers who chose to pay off their loans?

One reason teachers unions — a huge source of donations and political organizing for the Democratic Party — want loan forgiveness is that teachers and administrators can boost their pay by going back to school to get advanced degrees. Other municipal and federal workers — another major constituency for Democrats — have similar rules.

Whether or not you think that’s a good overall policy (I don’t), using the pandemic as an excuse to reward workers who are far less likely to lose their jobs and more likely to find new employment if they do, seems awfully self-serving.

The popularity of this idea stems from the fact that the Democratic Party has increasingly become the party of educated professionals, as the GOP has become more working-class. Lots of poor people are still Democrats, but they aren’t a major source of power within the party — the bureaucrats claiming to speak for them are. And that’s who Democrats are prioritizing.

Jonah Goldberg is editorin- chief of The Dispatch and the host of The Remnant podcast. His Twitter handle is @JonahDispatch. 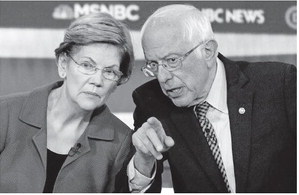