About 2,000 masks and liners have sold since spring

Phyllis Kuhn loathed flying on airplanes. It always seemed that the longtime Erie researcher would get a cold or other viral illness a few days after any trip.

She recalled working with a student on a research project that showed how brass doorknobs prevented bacterial and virus growth much better than stainless steel ones did. Kuhn wondered if a face mask made from copper, which is used to make brass, would be effective.

'My mind went back to copper, that it can kill microbes within five minutes,' said Kuhn, president of the Lake Erie Research Institute. 'What about making a copper-mesh face mask?'

Kuhn has worked for the past four years on the masks but wasn't sure how much of a demand there would be for them. Then the COVID-19 pandemic arrived.

She has sold about 2,000 of the lightweight masks and 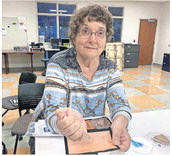 Phyllis Kuhn, a longtime Erie researcher, shows how a coppermesh face mask she helped design prevents fluid from seeping through. Kuhn is selling the face masks through her business, Kuhn Copper Solutions.

mask liners, many of them in the late spring and early summer after they were featured in Fast Company, a monthly business magazine. “I am getting a lot of feedback from people who buy them, saying that their allergies don’t seem as bad and they aren’t getting sick as often,” said Kuhn, who added that no testing has yet been done on the masks and filters to determine how well they prevent COVID-19 and other viral illnesses.

In 2017, Kuhn went to Penn State Behrend’s Innovations Commons lab and worked with Jake Marsh and his students on prototypes for the mask and filters.

“When Phyllis came to us, she didn’t have a prototype,” said Marsh, the lab’s director. “She had simply folded the mesh and glued string to it.”

Several prototypes were developed that helped hold the mask more securely to a person’s face. Another was made that just covered a person’s nose.

Marsh said it was exciting for him and his students to work on the masks and filters, even if Kuhn didn’t end up using any of the prototypes.

“Phyllis certainly was ahead of the curve about using copper mesh in face masks,” Marsh said. “I don’t know if anyone was thinking of this back in 2017.”

Though the masks are made of copper mesh, they work about as well as paper surgical masks at preventing fluids from seeping though, according to Kuhn’s tests. They also are lightweight and don’t hinder a person’s breathing.

Since the masks are made of copper, letting them sit for at least 5 minutes will kill all bacteria and viruses, Kuhn said. They can also be cleaned with rubbing alcohol.

The mask and filters are designed to be worn next to the skin, Kuhn said. Though a person might inhale or digest a trace amount of copper dust while wearing the mask, it’s not nearly enough to cause problems.

One mask or two filters cost $29.95. Kuhn said they are designed to last at least two years.

For information about the masks and filters, Kuhn recommended people visit her website, https://kuhncoppersolutions. org.