Help-wanted signs and advertisements seem to be everywhere in Erie County, and much of the country for that matter.

Locally, Taco Bell has offered a $1,000 signing bonus and other businesses have cut hours because of staffing shortages.

Some blame the shortage on fears about returning to the workplace or growing concerns about childcare. Others claim that a federal expansion of unemployment benefits provides an incentive to stay at home.

Whatever the cause, some economists say that a shortage of workers threatens economic recovery.

Statistics tell part of the story. The labor force participation rate has fallen 1.7 percentage points since the 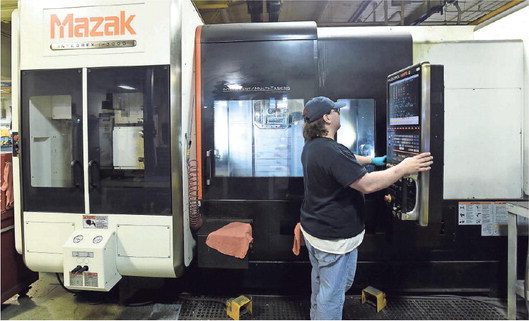 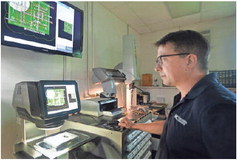 Continued from Page 1A

pandemic began while the number of people holding down jobs has declined by 7.6 million, according to a Bloomberg report.

Employment in Erie County’s manufacturing sector has fallen by 1,600 jobs since August 2019, declining from 19,500 to 17,900, according to the state Department of Labor & Industry.

As much as any other factor, that decline reflects an inability of manufacturing employers to find the workers they need, company leaders said.

“For every one of us, it’s now been six years that we are trying to fill a workforce,” said Jim Rutkowski Jr., general manager of Industrial Sales and Manufacturing in Millcreek Township.

“We have tried many avenues. We are well cognizant of the fact that we have lost three generations of high school students.”

Not only is there a shortage of manufacturing employees, but the existing workforce is getting older, Rutkowski said. A large share of the workers at local shops and factories graduated high school in the 1970s or 1980s, he said.

Scott Slawson, president of Local 506 of the United Electrical, Radio and Machine Workers of America at Wabtec Corp. in Erie, sees that reality reflected in his union membership. A couple of years ago, he said, a study of Wabtec employees found that the average employee was in his or her mid-50s.

“You think about it, we have almost skipped a generation of training manufacturing employees,” Slawson said.

A societal push to send more of our children to college, combined with closing and downgrading technical school programs, is a big part of the problem, Slawson said.

How can employers address the labor shortage?

“I think the companies should be pushing hard,” Slawson said. “They need to move hell and earth to retain the employees they have. You still need hands-on training. Who better to learn from than the person who does the job every day?”

The three manufacturers that met with the Erie Times-News — Rutkowski from ISM; James Willats, president of Machining Concepts; and William M. Hilbert Jr., CEO of Reddog Industries, the tooling division of PHB Corp., which employs about 600 people in Erie and Fairview — seem to agree on one point.

Their labor shortage is more chronic than temporary and won’t likely go away as concerns over the pandemic ease or expanded unemployment benefits expire.

On any given day, “Any one of us is in a position to hire people,” Rutkowski said.

Hilbert said there are more than 30 openings at his company in a wide range of positions.

But despite a $15 starting wage — for entry-level positions — and the promise of considerably higher pay after training, filling those positions remains a challenge, Hilbert said.

“Nobody has been able to develop a secret sauce to figure out what convinces a young man or young lady to go into the trades,” Hilbert said. “There is a stigma. People believe the trades to be a dark, dirty, underappreciated opportunity.”

Hilbert isn’t certain he has the solution, but his company does have a longterm approach that’s aimed at offering a fresh look at manufacturing.

Hilbert’s company invites seriousminded prospects to try it on for size.

“Spend six months with us and tell us what fits well with what you want to do going forward,” he said. “Perhaps they would pick office work or CNC work or some other kind of specialty. We do all types of manufacturing, welding and mold repair.”

At the end of those six months, the goal is to have employees begin training for the job they want.

“Instead of us writing a job description, you tell us what you want to do and we will try to make it work,” he said.

The role of the community college

Willats said he thinks the Erie County Community College, approved in summer 2020 by the state Board of Education, will help address the problems of local manufacturers, but the help won’t be immediate.

“The college will definitely help, but that help is five years away,” he said.

Some companies can’t wait that long.

The Erie Regional Manufacturer Partnership, a group of 20 local companies that employ nearly 6,000 people locally, has been working since 2014 to develop “a plan to identify, qualify and recruit individuals for manufacturing jobs.”

The ERMP, which merged with the Erie Regional Chamber and Growth Partnership on Jan. 1, has been working to develop pathways to family-sustaining jobs, said James Grunke, CEO of the chamber.

“It’s an intentional approach that begins with surveying members about their employment needs and then working with schools to fill those needs,” said Jake Rouch, vice president of economic development for the chamber.

The goal is training for a job that actually exists, he said.

“The idea is if you stay in the program, there is a pot of gold at the end of the rainbow, which is full-time employment,” Rouch said. “People need to know I am not training for the hell of it. It is training with intention and purpose.”

LIke Hilbert and Rutkowski, Willats could hire employees today. If he knew he could find enough of them, he would consider taking on more work and adding another shift, he said.

But he and other local manufacturers have problems that go beyond the need for training.

They have an image problem, Rutkowski said. Manufacturing isn’t something many parents want for their children.

“People have an image based on photos that are circa 1969,” he said.

“It’s clean, well-lit, and computercontrolled,” Hilbert said of manufacturing. “We talk about the fact that we not only train you, but we pay you. That means you are learning while you earn.”

Employment in Erie County’s manufacturing sector has fallen by 1,600 jobs since August 2019, declining from 19,500 to 17,900, according to the state Department of Labor & Industry. As much as any other factor, that decline reflects an inability of manufacturing employers to find the workers they need, company leaders said. 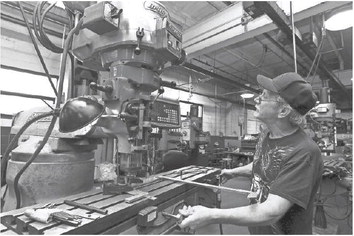 Machinist Jordan Bach, 22, checks a part at Machining Concepts on June 9, in Millcreek Towhship. Bach was creating interior threads for the stainless-steel part.