This article is made possible through Votebeat, a nonpartisan reporting project covering local election integrity and voting access. This article is available for reprint under the terms of Votebeat’s republishing policy.

HARRISBURG – Just a week out from Nov. 3, Sara May-Silfee had hundreds of mail ballots from last-minute applications that she knew had to get to voters as soon as possible.

Instead of sending the ballots to a printing and mailing company to handle, the Monroe County elections director immediately mailed them from her office, and even drove some straight to voters’ homes.

“I was trying to save time and get them out as quickly as possible,” May- Silfee said.

The last-minute scramble was part of a chaotic first run at Pennsylvania’s no-excuse vote-by-mail system. Among the factors that put more pressure on county officials, they said, was the Oct. 27 deadline for mail-ballot applications – just a week before Election Day.

Continued from Page 1A

“There’s no way that somebody can apply for a mail-in ballot seven, eight, nine days before the election, expect they’re going to get that, and have enough time to return it to the county,” said Forrest Lehman, Lycoming County’s elections director. More than 3.1 million people in Pennsylvania applied to vote by mail in November, and the state’s 67 counties processed every request, according to the Department of State. That means a mail ballot should have been sent or delivered to all voters who applied. But publicly available data from the state and U.S. Postal Service doesn’t show when lastminute ballots actually arrived or how many never arrived at all.

Just more than 500,000 mail-ballot applicants, or 16%, didn’t cast a vote that way. Many Pennsylvanians received ballots in the mail and simply decided to vote in person instead, election officials said.

But the seven-day turnaround period between the application deadline and Election Day meant some lastminute voters were sticking their ballots in the mail without certainty that county officials would receive them by the Nov. 6 deadline. At the Pittsburghbased Black Political Empowerment Project, voting rights organizers emphasized in their outreach to vote early by mail, said CEO Tim Stevens. Then on Oct. 27, the group issued a release asking voters not to put their ballots in the mail, but instead to take them in person to an Allegheny County election office because of concerns that the U.S. Postal Service would not deliver ballots until after the deadline.

“It was a logistical problem, I have to admit, that we were concerned about,” Stevens said.

York County processed some 93,000 ballot applications in total, including 10,735 between Oct. 22 and Oct. 29, according to the county’s spokesman, Mark Walters. Those voters had a small window to return ballots and secure a postmark by Election Day, as required.

Walters said there will be a last-minute rush no matter when the application deadline is, but seven days before Election Day just isn’t enough time.

“I don’t care how well your mail system is running,” Walters said. “On the best day that’s not feasible.”

The U.S. Postal Service apparently agrees. In October, the USPS directed voters to give themselves at least a week to send completed ballots, and at least two weeks to apply for them.

Gov. Tom Wolf and Secretary of the Commonwealth Kathy Boockvar urged voters in late October not to send their ballots in the mail, but to go in person to drop off their ballots at their county office or drop box.

“Just drop it off. We all know there’s mail delays, there’s no question, so avoid it,” Boockvar said on the last day to apply for a ballot. “I don’t want any voter thinking about what a court is or isn’t going to do.”

Citing issues with the USPS and an anticipated surge in turnout, Democrats asked the courts this past summer to allow counties to accept and count ballots received up to three days after the Nov. 3 deadline. The state Supreme Court granted the three-day extension, a decision Republicans decried as judicial overreach and asked the U.S. Supreme Court to overturn.

Roughly 10,000 ballots that arrived in that extended window are still sequestered should the high court decide to intervene, though that number is not enough to change results from any statewide races. Before the general election, the County Commissioners Association of Pennsylvania unsuccessfully lobbied state lawmakers to make the mail-ballot application deadline the same as the voter registration deadline: 15 days before Election Day. An earlier deadline would cut down on late-arriving ballots, said Lisa Schaefer, the group’s executive director, and the issue is still one of her organization’s top priorities. If lawmakers decide to change the deadline, Schaefer said giving voters enough time to learn and adjust to the new requirement is important. Pennsylvania’s next primary is May 18. “If you move that deadline back, you want that done sooner rather than later because you’ve got to educate voters and make sure that information is out there,” she said. 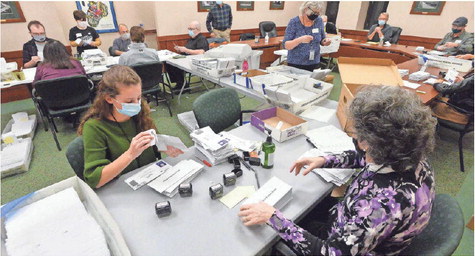 Continued from Page 8A

Voting rights advocates, who want to make it as easy as possible for people to vote, said the ballot application deadline should stay the same.

“The answer is not changing the application deadline, it’s changing the receipt deadline,” he said. “And then you just have very clear rules. So if I go and apply for a mail-in ballot one week before the election, I know as long as that ballot is returned or postmarked by Election Day, it will be counted.”

But Lehman, in Lycoming County, said even a three-day grace period after Election Day won’t solve the heart of the problem: concerns among voters that their ballot won’t arrive in time.

Election officials said that lack of confidence led many to go to their polling place and vote provisionally as an insurance policy. More than 100,000 people cast provisional ballots, which are time-consuming for counties to process.

If people who have already voted by mail decide to also cast a ballot in person, that eliminates the purpose and benefits of the system, election officials argued.

“When they hear their ballot’s not here – ‘but don’t do anything on Election Day, just trust your ballot will show up at the county by that third day after the election’ – are people going to listen to that?” Lehman said. “The obvious answer is no.”

Spotlight PA relies on funding from foundations and readers like you who are committed to accountability journalism that gets results. Become a member today at spotlightpa.org/donate.

“There’s no way that somebody can apply for a mail-in ballot seven, eight, nine days before the election, expect they’re going to get that, and have enough time to return it to the county.” Forrest Lehman 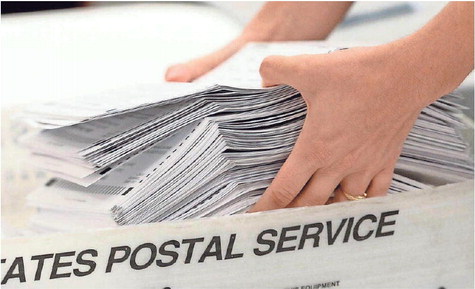 Mail-in ballots are sorted Nov. 4 at the Erie County Courthouse. More than 3.1 million people in Pennsylvania applied to vote by mail in November, and the state’s 67 counties processed every request, according to the Department of State. That means a mail ballot should have been sent or delivered to all voters who applied.